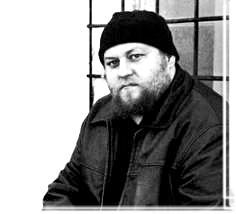 Félix Romeo started his literary career in 1995 with the celebrated novella Dibujos animados (Mira Editores, 1995; Plaza & Janés, 1996; Anagrama, 2001) which was awarded the Ícaro Award. Discothèque (Anagrama, 2001) was his second book and was followed by Amarillo (Plot, 2008). Félix Romeo was a regular contributor to the Spanish cultural media. He died prematurely at the age 43, leaving an unpublished manuscript about a friend he met in Torrero’s prison, where he was arrested for be a draft-dodge, on 1994 and 1995. The manuscript was published a posthomous novel entitled Noche de los enamorados (Mondadori, 2012).

His intellectual legacy, as befits a lover of the written word, is Las cuatro novelas (DeBolsillo, 2013), bringing together in one volume the novels Dibujos animados, Discothèque, Amarillo and Noche de los enamorados.

“It would be no great stretch to compare him to the protagonists of Saul Bellow’s novels, one of those larger-than-life intellectuals who, much like Humboldt or Ravelstein, seem to embody humanity in all its magnificent contrariness.” Javier Cercas